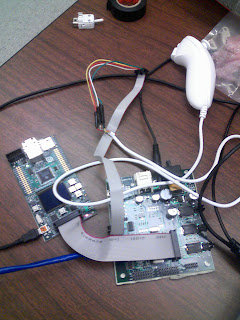 The past few weeks I setup both the Wii MotionPlus and the Wii Nunchuk for use with the orc board. The Wii Nunchuck will allow for both joystick control along with some accelerometer readings, while the Wii MotionPlus is an incredibly cheap gyroscope that can be used on the robot. The Wii MotionPlus works by providing a value indicating it's motion along 3 axis. This value is roughly divided by 20 to provide how many degrees of movement. Normal Gyroscopes can range anywhere from $40 to much more, so a cheap $20 gyroscope will help to make the production of robots much cheaper. The LM3S9B92 microcontroller has been delayed due to the issues with OpenOCD, and the CAN firmware is still being worked on. I expect to get the ordered OBD-II connector in soon (this connector allows for connecting to vehicles that support CAN, virtually every car produced during/after 2003 supports it). I also will be getting several 1K Ohm resistors to fix the issue of the beacon not support straight 9V, an unfortunate design flaw that needs to be fixed. For those interested in interfacing with the nunchuck and motionplus, I will make another post soon with detailed instructions.
Posted by Salgat at 5:58 AM